They have fulltime jobs, they pay their loans, and they’re saving for the future.

While 65% of recent college graduates say they wish they knew more about personal finance, they seem to be doing pretty well for themselves:

82% are paying their student debt off every month

67% are putting money away for their future

And overall, 65% feel like they have their personal finances under control

College graduation usually ushers in financial independence. But we often hear about how rising student loan debt, the challenge of landing a job (even amidst a 5.2% increase in recent grad hiring), and high rent can give recent grads trouble getting on their feet.

So Walletpath wanted to investigate how recent college graduates are managing their personal finance, and how they feel about it.

College grads are paying off their student loan debt 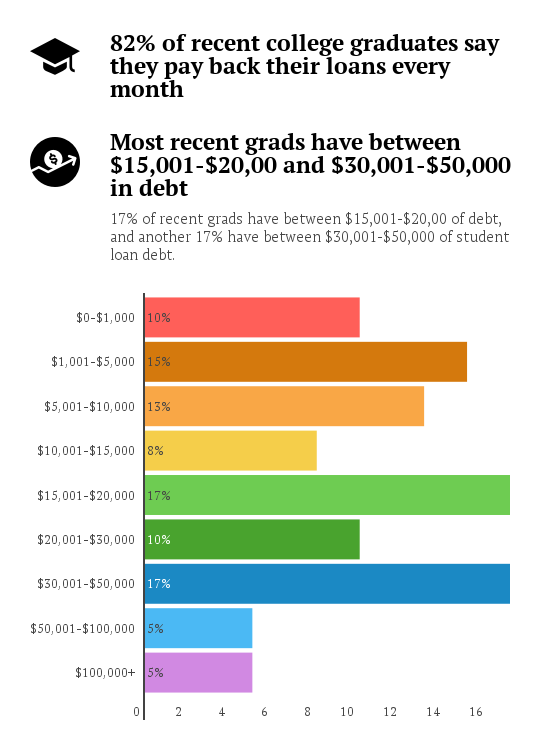 But is this high number surprising? According to the Education Department, and as cited by the Journal Sentinel, the group most likely to default on their payments aren’t the students buried in debt, but rather those who never graduated. The Journal sentinel says the drop outs typically owe less than just $9,000, but without a college degree it may be harder to pay back those loans.

The students surveyed by Walletpath all graduated a 4 year college within the last 5 years, and on top of that it’s also important to note the exit counseling that’s provided for graduates that may have also helped. Students who borrow federal funds are required to participate in exit counseling which helps the student understand their debt, and repayment structure. So besides holding down full time jobs (which we’ll get to in the next section), simply graduating and having exit counseling could be what contributes to a majority of recent grads paying off their loans monthly, without fault.

They’re working, and saving for the future

The job market is in a much better place than it was a few years ago, and a great way to track some of that improvement is through recent graduate hiring. A Wall Street Journal survey revealed that 67% of employers are looking to hire recent grads this year, that’s a 5.2% increase from 2015. But even last year WSJ found that hiring for recent grads was improving, with a nearly 50% increase in job openings for recent grads. And those improving numbers are backed up in the Walletpath findings.

84% of recent grads surveyed said they had a job, but let’s break it down:

These numbers show that 54%, a majority of recent graduates, are holding down full time jobs — although 32% of them are working in fields unrelated to what they studied in college. Another 30% of recent college graduates are working part time, and about half that amount (16%) aren’t working at all.

What these numbers illustrate is that jobs are out there for recent grads, like the WSJ pointed out. But it also highlights the work that still needs to be done: while 54% have full time jobs, that leaves 46% of recent grads not working to their full potential, or working at all.

Despite this, a majority of recent graduates aren’t just holding down jobs, they’re thinking ahead. 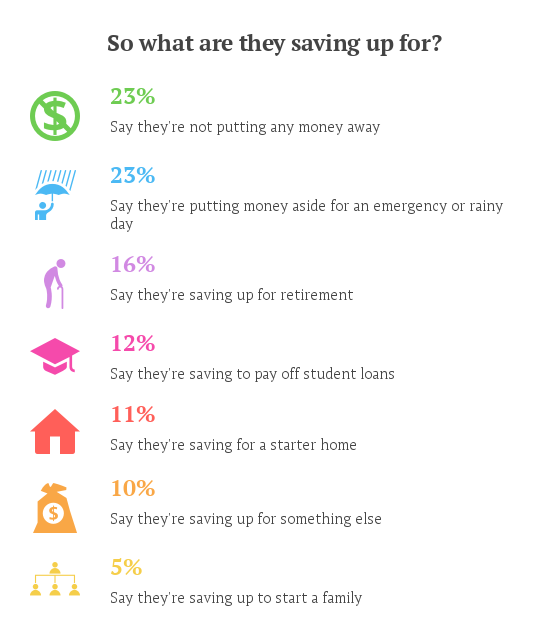 As we illustrate in the infographic, saving up for a rainy day or an emergency is the top reason recent grads are putting money away — besides not saving up money at all. Maybe most surprisingly though, is that 16% of them are saving up for retirement. What we see here is a big disparity for what these recent grads consider “the future”. 23% consider saving for the future as something that could happen tomorrow, like their car breaking down and needing to dive into their rainy day fund to fix it. But then on the other end of the spectrum, the second highest thing recent graduates are saving for is retirement, despite just 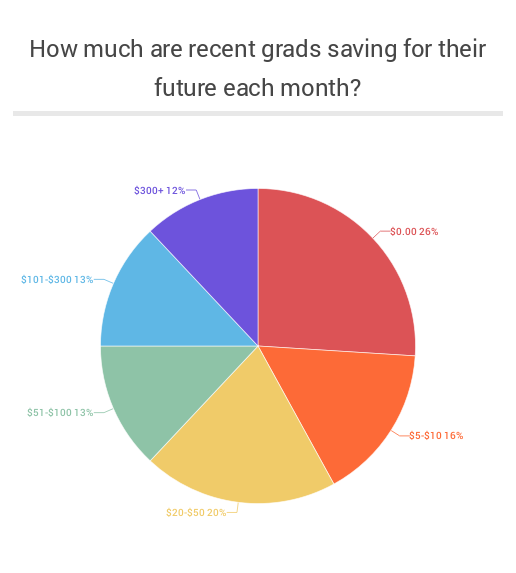 But besides understanding what recent grads are saving up for, if at all, Walletpath was curious about how much they were putting away. With 84% of recent grads employed, and 54% of those with full time jobs, the data below shows a good correlation between those with jobs putting money away — as only 26% said they aren’t saving anything ($0.00) at all a month.

There was a bit of a discrepancy in the data: 37% percent say they aren’t saving money at all, but when asked how much money they were saving for their future each month, only 26% said they weren’t saving anything. The difference of about 10 percent might be explained by 16% of surveyors saying they only save $5-$10 a month. There’s the possibility that some who answered that they weren’t saving up realized they do stash a bit of cash away after all, even if it’s only 5 or 10 bucks a month.

The rest of the data correlates well: 58% of recent grads are saving as low as $20 but as much as $300 or more a month. That number is pretty close to the percentage of recent grads who have full time jobs (54%).

Recent grads feel like they have their finances under control, but they want to learn more

Maybe it’s because they’re still students at heart, but recent grads are recognizing that they still have a long way to go and a lot to learn despite their triumphs.  Because like mentioned above: 46% of recent grads have yet to land a full time job or even a job at all, 26% haven’t started saving, and they do have more to learn about credit.

When asked what their credit score was, 22% of recent grads said they’ve never checked, and another 11% said they hadn’t checked in a while and weren’t sure. You think they treated their GPA’s like that?

This real life personal finance measurement is massively important, especially to young people starting their lives. Credit scores determine what kinds of apartments you can rent, the home and car you can buy, and banks you can use. But student loan debt is also a bit part of credit scores, so it is promising that 82% say they pay their loans every month, and 43% say they sometimes even pay more than the minimum.

But back to credit cards, the Walletpath survey revealed college grads still need some development when it comes to their scores because while 75% say they’ve started building credit, 33% aren’t even sure what their credit score is.

Walletpath conducted a 14-question survey to analyze how 100 recent college graduates are managing their personal finance, and their opinion of their personal financial situation. This survey was conducted online within the United States by PollFish on behalf of WalletPath on May 11, 2017. Survey participants were 18 years and older, and graduated a 4 year college within the last 5 years.